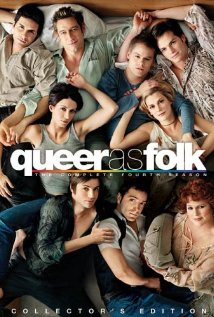 Queer as Folk is a celebration of the lives and passions of a group of gay friends. It is not meant to reflect all of gay society.
—US Show disclaimer

Queer As Folk was originally conceived by Russell T. Davies as a comedy drama set in Manchester's gay village. It followed the lives of three gay men: swaggering, self-assured Stuart Allen Jones; his less-self-assured best friend Vince Tyler, who has an unrequited crush on him; and their new friend Nathan Maloney, a young man just finishing school and discovering the Scene.

It was eventually remade for the US. The story was set in Pittsburgh and expanded to include the lives of five gay men and two lesbians: the occasional narrator Michael, his smooth-talking cynical best friend Brian, conservative accountant Ted, flamboyant and witty Emmett, new-to-the-scene Justin, art teacher and mother Lindsay, and tough lawyer Melanie. As the US version lasted for five seasons, it took many notable detours from the source material. Now with a Character Sheet! Due to the series approaching Loads and Loads of Characters territory, any help is appreciated.

A reimagining of the series was originally announced for Bravo in 2018, later moving to Peacock in 2019. Russell T. Davies, creator of the original UK series, will serve as executive producer, while Stephen Dunn (Closet Monster) has been tapped to write.

Like Sex and the City, except with men in the stereotypical gay man roles. Also compare The L Word (for lesbians), and Noah's Arc (for Black gay men).

Both the UK and American shows contain:

The UK Show contains examples of:

The US show contains examples of: