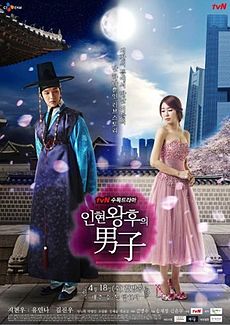 Queen In Hyun's Man (인현왕후의 남자) (aka Queen and I) is a 16 episode Korean Drama which aired on the cable network tvN in 2012. It stars Ji Hyun Woo as the Joseon scholar Kim Boong Do and Yoo Inna as aspiring actress Choi Hee Jin.

In 1694 Joseon, it is the reign of King Sukjong. Queen In Hyun is living in exile after being deposed through the machinations of the ambitious concubine Lady Jang (also known as Jang Heebin). Fearing that the king will have a change of heart, Lady Jang and Right Minister Min decide to kill Queen In Hyun, but their assassination attempt is foiled by Kim Boong Do, a scholar loyal to Queen In Hyun. The conspirators later attempt to assassinate Boong Do in a library, but just as the assassin Ja Soo is about to kill him, Boong Do mysteriously vanishes.

2012 Seoul. Choi Hee Jin is an aspiring actress who has just received her first big break: the role of Queen In Hyun in the upcoming historical drama New Jang Heebin—in other words, she will be in a show dramatizing the events Boong Do is experiencing in 1694. She runs into a strange man on set — Boong Do, who has somehow been transported to the future. Boong Do soon figures out that the time travel is caused by a talisman given to him by the loyal gisaeng Yoon Wol, and uses it to help his plans of toppling Minister Min and reinstating Queen In Hyun. Hee Jin eventually believes his story and helps him adapt to modern life, and the two soon fall in love. But it is not easy to fight a time gap of 300 years, and changing history has consequences.