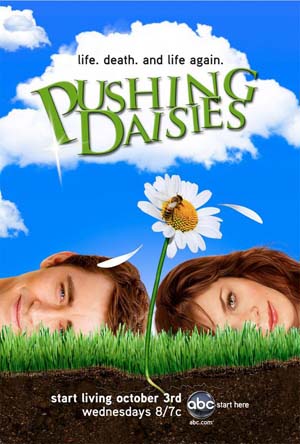 "Well, I suppose dying's as good an excuse as any to start living."
— Charlotte "Chuck" Charles
Advertisement:

The facts are these:

There once was a piemaker who could raise the dead with a touch — but only for sixty seconds, or else someone else would have to die to take their place. If he touched the resurrected person again, they died permanently. One day, the piemaker was given the opportunity to raise Chuck, his childhood sweetheart... So he did. This act brought the two much closer, but tragically kept them apart; one more touch would mean Chuck would be dead forever. Along with his undead dog, a grumpy private eye, Chuck's eccentric aunts and a singing waitress, they solved murders, asking the dead who their murderers were in those sixty seconds and then collecting the often substantial reward for finding the killers.

That could be the premise of Pushing Daisies if it weren't a laughably inadequate description.

Created by Wonderfalls and Dead Like Me creator Bryan Fuller, and set In a World… lavishly decorated in Fifties styles, the show effortlessly makes its faintly ridiculous plots believable, as it deftly traces the line between earnestness and irony. Its fast-paced and witty dialogue, quirky characters, and great acting really bring out what can only be called the heart of the show: showing how people connect — or don't connect — with their fellow humans.

Unfortunately, it ended up doomed to live up to its name. The first season was truncated by the 2007 TV Strikes, and the second season didn't have much of a head of steam under it. The writing team was given 3 episodes to wrap up the series, and the last episode was aired on June 13, 2009 - one year, eight months, one week and three days after the first. The two seasons together make up a normal full-sized season.

The Tropes Are These: