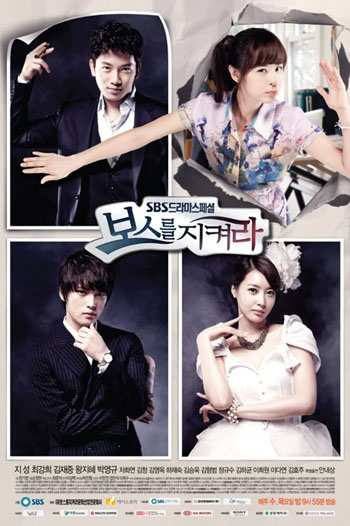 What happens when a former juvenile delinquent (played by Choi Kang Hee) lands a secretarial position for an immature chaebol heir (Ji Sung)? What if both he and his cousin (Hero Jaejoong) fall for her? Add a former girlfriend (Wang Ji Hye) into the mix, and what's next? Hilarity Ensues, of course!

Protect the Boss (보스를 지켜라) is a 2011 Romantic Comedy which aired in South Korea, also known as The Boss Has Changed and The Last Secretary. After being repeatedly impeded by her Backstory, No Eun Seol becomes the secretary for agoraphobic Cha Ji Heon. His father, Chairman Cha of DN Group, assigns Eun Seol with the task of grooming Ji Heon into his successor. As she attempts to cure him, Ji Heon comes to the conclusion that he can't live without her. In a romantic sense, as well.

To complicate matters, Cha Moo Won, Ji Heon's more handsome and capable cousin, falls for Eun Seol as well. Too bad Moo Won's mother, Shin Sook Hee, has other plans for her son—to take over the company. Preferably by marrying Seo Na Yoon, whose family would give Moo Won the backing he needs to become heir.

Oh, and Na Yoon is Ji Heon's ex, who just happens to want him back.