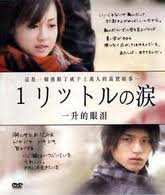 "Why did the disease choose me? I cannot carry it, if it's just for the word 'fate.'"
Advertisement:

Aya Ikeuchi was 15 years old and just starting high school when she was diagnosed with a cruel disease called Spinocerebellar Degeneration Disease. Slowly she was robbed of her ability to walk, talk, or eat and even daily mundane tasks were a challenge for her. What was sadder was it didn't affect the mind at all which meant she could see just how helpless she was becoming. Still, Aya didn't want to just leave this world without saying anything, and wrote about her life for as long as she could use a pen and a notepad...

This drama is based on the writings of a real life Ill Girl, Aya Kitou (1962-1988). Although her expy lived in the 21st century, her character was based on how the real Aya from The '80s struggled and fought her disease and how she wrote her deepest thoughts until the last day she could hold a pen. Before she died, Kitou's writings were published including the poems she wrote while she was staying in a school for the disabled. This gave new hopes to the people who suffered the same disease as she did and soon Aya Kitou received letters of appreciation and thanks from those people. At the age of 25, she succumbed to the disease and died a peaceful death while sleeping, her thoughts and words preserved in her writings and later in the series.