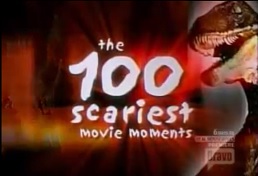 In 2004, Bravo counted down the 100 Scariest Movie Moments. The list had a fairly even mix of movies from different periods and sub-genres, including the silent screamers, the Universal monster movies, Italian giallo, slasher pics and even Asian horror. Moreover, the list included a few movies outside the horror genre because they contained classic examples of Nightmare Fuel. The list is as follows (spoilers abound):

There was another program that aired in October 2006 entitled "30 Even Scarier Movie Moments", mostly consisting of movies that just barely missed the first list, and recent horror films that had come out since. It is as follows.