Welcome to the center of the ESPN newsroom, here in Bristol, Connecticut! 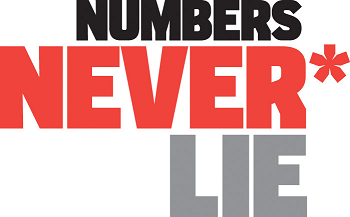 Another member of ESPN's "sportswriters yack about sports" group along with with Around the Horn, Highly Questionable, Jim Rome is Burning, Pardon the Interruption and SportsNation, Numbers Never* Lie focuses on the statistics side of sports.

Originally hosted by Charissa Thompson and infrequent Around the Horn panelist Michael Smith. After Thompson left to replace Michelle Beadle on SportsNation NNL has since been hosted by Michael Smith, Jalen Rose, Hugh Douglas, and Rob Parker. Later Jemele Hill would take over co-hosting duties with Smith, eventually leading to a show re-branding (See below).

Segments in this show include some variation of "X or Y" - including Michael's favorite "Over/Under", plus the show-ending "Numbers You Need To Know," which runs down the good and bad numbers of the day.

On November 3, 2014, Numbers Never* Lie was re-branded as His & Hers, matching the name of Smith and Hill's ESPN podcast and focusing more on general sports talk. In October of 2016, it was announced that Smith and Hill would take over anchor duties for the 6 P.M. Eastern/3 P.M. Pacific edition of SportsCenter effective February 6, 2017, and that His & Hers would be ending prior to that; the show aired its final episode on January 6, 2017.