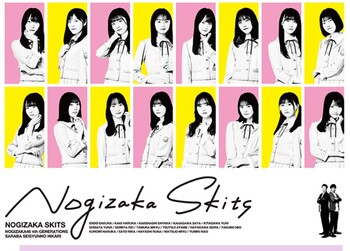 Nogizaka Skits was a Japanese Sketch Comedy show, aired on Nippon Television for two seasons from 2020 to 2021. A live comedy and concert show called Nogizaka Skits Live was also broadcast on Hulu in April 2021. It was hosted by the Comedy Duo Saraba Seishun no Hikari (Tetsuya Morita and Higashi Bukuro) and starred members of Nogizaka46, specifically the fourth generation in season 1 and the 3rd and 4th generation in season 2.

It was the second regular show to focus on the fourth generation Nogizaka46 members, after its predecessor Nogizaka Doko e?. After season 2, the show was replaced with the music show Nogizaka Star Tanjou!, also starring Nogizaka's 4th generation.

The next skit contains examples of the following tropes: