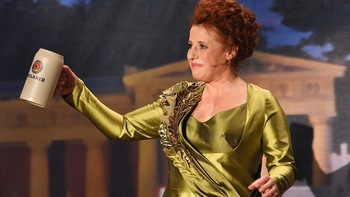 The Starkbieranstich am Nockherberg (or as it is generally reffered to as: The Nockherberg) is a once-a-year satirical event in the Paulaner Brauerei in Munich.

It celebrates the first batch of newly produced beer, which the Bavarian Ministerpräsident blesses, by royally making fun of the politicians that have assembled.

After the beer ceremony a speech is given by someone (often a monk or more recently the Mama Bavaria) and then a musical is performed, both of which make fun of German but especially Bavarian politics of the past year. Despite the event taking the piss (Bavarian "derblecken") out of the political class, not being made fun of is often considered the bigger insult (implying that you're not important enough to care about). The only acceptable reaction is deemed to be Actually Pretty Funny and some politicians have earned grudging respect even by the other political side by being remarkably good sports.