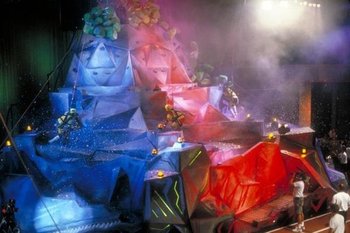 Nickelodeon GUTS was a game show by, well, Nickelodeon. Described as American Gladiators for kids, this show allowed three kids to compete against one another in five events.

The games themselves were either based on the Olympics (Triple Jump, Vertiboggan, Jump! Jump!), actual sports (Off the Wall for baseball, Rebound for basketball, and Fumble for football — though it was changed to Rugby in 1994), or a strange mixture (Basic Training, which later became Extreme Baseball in 1994). The competitors have to either go through the courses by themselves or compete with others, depending on the events.

At the end of the four events, there is the final event, The Aggro Crag. In it, the competitors had to set off actuators — depending on when the show was aired, it would be around six to eventually eight — while climbing. And if that wasn't enough, they would have to deal with falling rocks, water and slime on their faces, and snow falling down. The competitor who had the most points would win a gold medal and a glowing piece of the Crag.

In 1995, Nickelodeon GUTS was retitled Global GUTS. It worked as a mixture of the original series and the Olympics with eight countries battling it out. At the end of the series, the United Kingdom won eight medals and the show. It should be noted that this was the only time where there was an injury during one of the events: CIS contestant Katya sprained her ankle during Tornado Run. Stepan, also from the Commonwealth of Independent States, took her place and won a silver medal for both of them (had Katya not gotten third in the first two events, he would have likely taken the gold due to winning all his events).

In 2008, the show was remade into My Family's Got GUTS. It is basically the original series meets ''My Dad is Better Than Your Dad''. * Mike O'Malley and Moira Quirk, the original hosts, were replaced by Ben Lyons and Asha Kuerten.

Reruns of the show aired on Nickelodeon GAS until the channel's disestablishment in 2007. It was then shown on TurboNick, Nick's online video service of the era, until it shuttered in Summer 2009.

Game Show Tropes in Use:

No ifs, ands or buts, these kids behind me, they've got guts. DO YOU HAVE IT?!