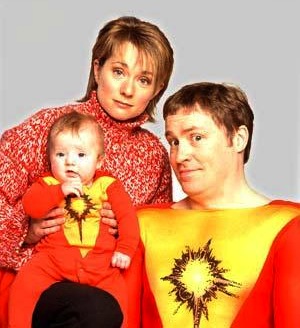 Another one of those British comedies that's apparently considered bad in its home country yet gets a lot of airtime in America, mainly due to PBS thinking "British = good".

Thermoman, a superhero from the planet Ultron (a planet whose major industry seems to be superheroes), currently works to protect the planet Earth. After saving a nurse named Janet from falling into the Grand Canyon, he falls in love with her and moves to Northolt (her home town), where he adopts the secret identity of George Sunday. As George, he opens a health food shop that seems destined for perpetual failure... but this stab at a normal life is enough to cause Janet to fall for him.

The series focuses primarily on the troubles involved in the day-to-day life of an alien superhero. Major recurring characters include Janet's parents, who disapprove of George mainly on grounds of taste; her employer, Dr. Piers Crispin, who's desperate for media attention; Piers' secretary, Mrs. Raven, a bitter, undisguised sadist; George's cousin Arnie, who used to be a superhero but was fired by the Ultron Council for using his job in the name of profit; and George and Janet's neighbor, Tyler, who knows George is Thermoman... but doesn't risk breaking the superhero's Masquerade because he's also completely insane. The latest series includes George's children with Janet, who are voiced by adult actors.

Originally starred Ardal O'Hanlon from Father Ted, who left the show in the last season and was replaced by James Dreyfus.

Not to be confused with the Nintendo Hard Sega Master System game of the same name and the song by Foo Fighters. Also, it shouldn't be confused with My Hero Academia nor its similarly named predecessor one-shot, even if they feature super heroes.