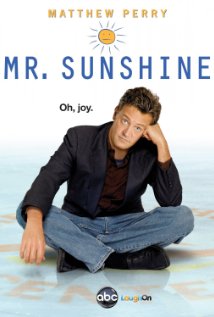 Could he be any more cynical?
Ben: I'll tell you what's wrong! Something's happening to me! Roman, is very sad about his mother, and that makes me sad. Crystal, is very very upset about a little blue person, and that makes me upset. It's just occurring to me now, I'm actually curious, how your night went with Alonzo! What the hell's happening to me?
Alice: Aw, you're becoming an actual human being!
Ben: Well I don't like it!

Mr. Sunshine is a Sitcom about misanthrope Ben Donovan and his work at the Sunshine Center, a second-rate arena in San Diego. Somewhat an ensemble show, Ben's travails are caused by his wacky employees (and boss) and the occasional Jerkass from the outside world. He's the manager of the arena, and his job is to make sure that the events taking place at the arena run smoothly so the arena makes money.

Other characters include his boss Crystal, his former benefriend Alice, his assistant Heather, his friend Alonzo, and his boss's son Roman.

Astonishingly, despite starring Allison Janney, Matthew Perry, Nate Torrence, and James Lesure (also Studio 60) this is not a show by Aaron Sorkin. Rather, it was co-created by Perry himself, and he may have recruited the other two from his time on Sorkin's shows. Or it could be just a coincidence.

In a move that couldn't be less surprising, the series was cancelled after lackluster ratings for its half-season run.

Not to be confused with the South Korean drama of the same name.