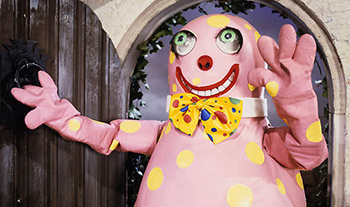 A strange, strange, strange example of the weirdness of British television in the 1990s, Mr Blobby began life as a character appearing on Noel Edmonds' variety show Noel's House Party.

Not so much a character as a force of nature, Blobby was a tall, pink blob covered from his overly large head to his overly large feet in yellow spots. He also boasted a pair of bulging round googly eyes and a permanent toothy grin and, as if this was not weird enough already, he spoke in a highly distorted, nightmarish electronic voice and said only his own name.

He appeared on the "Gotcha" sketch on Noels House Party which hoaxed celebrities into thinking that Blobby was a popular childrens television character filming an episode about their particular line of work. Mr Blobby would begin by clumsily trying to take part in whatever activity their celebrity guest was trying to teach him before giving up entirely and resorting to rather violently breaking the set in order to frustrate the unwitting celebrity.

After "Gotcha" hit the air the character could no longer be used in the same way but the popularity of the character led to him making frequent appearances in other parts of Noel's House Party (usually to unleash some chaos and destruction on poor Noel himself). In fact, Mr Blobby was so popular that in 1993 he released his own single and hit number one in the UK. Twice.

After a successful music career, Mr Blobby took up the job of being a popular "guest" at university balls, cameoing on Noel's House Party and occasionally invading other shows for kicks before joining the cast of BBC One's Saturday Morning Kids’ Show Live & Kicking for its second series and The Generation Game on Saturday evenings.