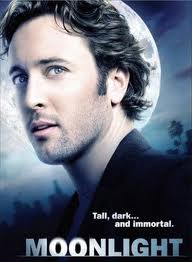 A short-lived Vampire Detective Series that ran from 2007 to 2008 on CBS. Some saw it as a shameless ripoff of several other vampire shows. It started to develop its own mythology, but was cancelled before it could really find its footing. It's notable that while critics panned the acting and dialogue, almost everyone agreed that side character Josef Kostan was a real gem.

The show revolves around Mick St. John, an 85-year-old private investigator (though thanks to vampirism, he looks pretty good for his age). Despite being turned well over 50 years ago, Mick still has some angst about being a vampire, and refuses to kill for food. He has no qualms killing bad guys or other vampires, though. He also has some surprising hang-ups regarding a pretty young blonde...

Not to be confused with the series Moonlighting, starring Cybill Shepherd and Bruce Willis, or the 2016 film Moonlight.