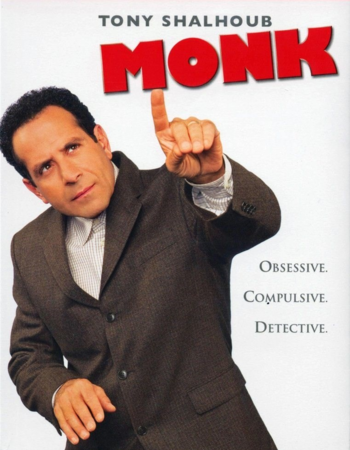 Monk is a Detective Dramedy series that aired on USA Network from 2002 to 2009.

The show is about Adrian Monk (Tony Shalhoub), a former San Francisco police inspector who suffered a nervous breakdown after the murder of his wife, Trudy. He is a lifelong sufferer of obsessive-compulsive personality disorder and has many phobias, and those obsessions became crippling after his breakdown, forcing his retirement; he recovers throughout the series, though he is never fully "cured". His OCPDnote OCD is an anxiety disorder, OCPD a personality disorder. They're not the same thing, and it's possible to have both. OCPD is not to be confused with COPD, which is a respiratory illness. Monk definitely has OCPD. is also the reason Monk was such a successful policeman; one of his compulsions is paying amazing attention to details.

Thanks to his breakdown, Monk was discharged from his department. However, he is frequently called in to consult on cases which baffle the police (often some kind of Locked Room Mystery) by his friend and former partner/commander, Captain Leland Stottlemeyer (Ted Levine). His disorders are part and parcel of his unique mind; without them, he wouldn't be able to solve these cases. Of course, the one case Monk's been trying to solve since his breakdown is Trudy's murder, and each season of the show brings him a little closer to finally unraveling the mystery behind her death (with the show's final season bringing the case to a close for good). Meanwhile, Monk is assisted in his investigations by his former nurse Sharona Fleming (Bitty Schram), and, after Sharona's departure in the third season, by Natalie Teeger (Traylor Howard).

Monk is notable for subverting pretty much every Perp Sweating convention; due to Monk's disorder and the invariable intelligent cockiness of the bad guy, he's always the one in any round of questioning who's uncomfortable and making mistakes. Of course, many of the comedic situations in the series would not exist if Monk or one of his friends would simply explain his issues to others. So they don't. However, despite the perpetual comedy at his expense, he is largely portrayed sympathetically. Viewers come to believe that his condition is, as Monk himself puts it, "a gift... and a curse".

This show was a turning point for the USA Network. USA was previously a channel with a lineup consisting mainly of reruns, cartoons, game shows, Wings (which incidentally also starred Tony Shalhoub), WWE programs and low-to-middling quality original programming (and, of course, Duckman). Monk was the first major hit show for the network, launching what has become a string of popular, critically-acclaimed series.

In 2020, the cast reunited for a special

on the Peacock network to raise awareness for the COVID-19 Pandemic, depicting Monk trying to cope with the quarantine as his friends check in. The special was especially notable as Tony Shalhoub himself had contracted and recovered from the virus some time before it aired.

Not to be confused with the Gothic novel, which is about an actual monk.

Unless I'm wrong, which, you know, I'm not, this show provides examples of the following tropes:

Note: Monk spawned a book series which currently consists of 19 novels. Examples for it are also found in trope list.

Between its first two seasons, ''Monk'' switched from an instrumental theme tune to a vocal one.

Example of:
Replaced the Theme Tune

Between its first two seasons, ''Monk'' switched from an instrumental theme tune to a vocal one.