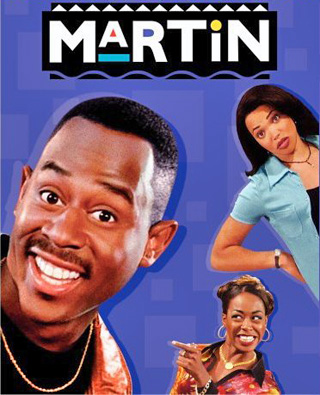 Martin is a sitcom that aired on FOX from 1992 to 1997. It stars Martin Lawrence as Martin Payne, a Detroit disc jockey who has various misadventures with his girlfriend (later wife) Gina (Tisha Campbell), homeboys Tommy (Thomas Mikal Ford) and Cole (Carl Anthony Payne II), and Gina's friend Pam (Tichina Arnold). For four seasons, it was one of FOX's most popular shows.

And then it was discovered that Lawrence was abusing drugs. Even worse, Campbell sued him for sexual harassment. At that point, she refused to be in the same room as Lawrence, even when filming. Needless to say, the writers had a difficult time writing around this.note They basically had the couple interact by yelling from different rooms or talking on the phone with a split screen. This spelled the end of the series in just one season. Still, reruns air on syndication all over the U.S.

Not to be confused with the cult vampire film Martin by George A. Romero.