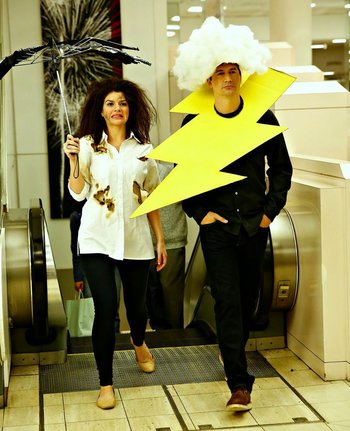 The Official Couple trying really hard to make it, well, official. With or without ridiculous costumes.
Advertisement:

Marry Me is a sitcom that aired on NBC in the 2014-2015 season. It's something of a Spiritual Successor to Happy Endings, in that it is created by that show's creator David Caspe and stars Casey Wilson in the female lead, and is set in the same city. Fittingly enough Caspe and Wilson got married in the interim between shows, and Wilson became pregnant with their child during production. (It did not get written into the show.)

Annie (Casey Wilson) and Jake (Ken Marino) are a Chicago couple who have been dating for six years. On their return from a romantic trip to Mexico, Annie loses patience with Jake's failure to propose. Unbeknownst to her, he's in the midst of a surprise proposal. Her unloading on him causes him to retract his proposal with the promise of trying again in a few days. She tries to fix things by proposing to him at his office. Unfortunately Jake had told his boss that he was in the hospital with his dying father, not on a trip to Mexico. Needless to say, further complications ensue.

NBC cancelled the series after one season. But not before Annie and Jake got married.

Will you make these the happiest tropes on Earth?