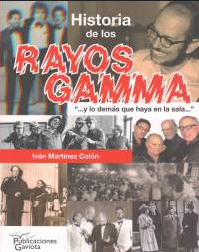 ("The Gamma Rays") is a Puerto Rican comedy troupe, dedicated to Social Satire: they make fun of social problems (mostly government corruption) to bring attention to them. Their catchphrase is "Ofendiendo a todos por igual" ("Offending everybody equally"). They are notable for being composed of persons who also have successful careers outside of comedy, and for using more highbrow than lowbrow humor. People often wonder why such high-career white collar guys get together to make fools of themselves in public.

The group was formed in the 1970s; their name comes from another a friend of theirs, journalist and writer Eddie López, who died from cancer. He attributed his quirky personality to "the effect of the gamma rays" he was being treated with (he may have been referencing the title of the novel The Effect of Gamma Rays on Man in the Moon Marygolds too.) After his death, his friends decided to stay together and continue his work.

Their level of activity has varied over the years; at one point they had their own, weekly TV show, but recently they have limited themselves to yearly theater performances. Still, they remain beloved by the public, to the point that even some of the politicians they have mocked have guest-starred in their shows!

While the group's membership has varied over the years, the best known members include: