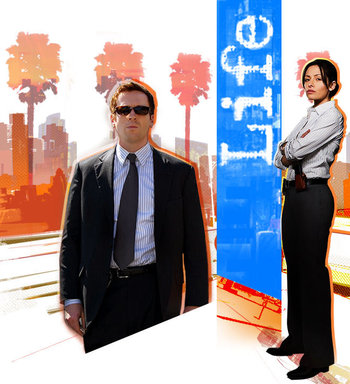 Officer Charlie Crews (Damian Lewis) was Wrongly Accused of murdering his business partner and his family and spent twelve years in prison before being exonerated by DNA evidence. Now, back as a detective, he's trying to figure out who actually committed the crime and why he was sent away.

There are a few things notable about Life: in prison, Crews found a copy of The Path to Zen and thus, as a result of long years of (a) being in prison while (b) studying Zen philosophy on his own and (c) having the crap beaten out of him by other inmates, he has come out of prison as The Exotic Detective, a cross between a Cloudcuckoolander, a Defective Detective, and a Cowboy Cop. To top it off, Crews won a huge lawsuit against the police department (which included his reinstatement and promotion to Detective), so he's basically a crime-solving Eccentric Millionaire.

Life premiered on September 26, 2007 on NBC. On May 4, 2009, NBC announced its cancellation, a month after the final episode had been aired.

Not to be confused with Discovery Channel/The BBC nature documentary miniseries Life.