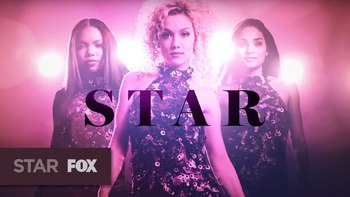 Star is an musical drama series created by Lee Daniels and Tom Donaghy for Fox. It revolves around three talented young singers named Star (Jude Demorest), Simone (Brittany O'Grady), and Alex (Ryan Destiny), who navigate the music business on their road to success. The series, which is set in Atlanta, consists of original music, along with musical fantasy sequences, as dreams of the future. Twelve episodes were ordered, which premiered during the 2016–2017 television season. Queen Latifah, Benjamin Bratt, Amiyah Scott and Quincy Brown co-star.

The series premiered on December 14, 2016. With the premiere of the series, Amiyah Scott became the third openly transgender person to play a trans major character in a scripted television drama series in America, after Laverne Cox on Orange Is the New Black and Jamie Clayton on Sense8.

On February 22, 2017, Fox renewed the series for a second season, which premiered on September 27, 2017 and crossed over with Empire. The third season premiered on September 26, 2018. Unfortunately, the series was not renewed for a fourth season, as it was caught up in the fallout of the Disney/20th Century Fox acquisition, leaving the series ending with a cliffhanger. Lee Daniels has said that he has plans on resolving the cliffhanger with a telefilm one day.