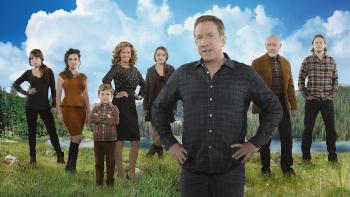 "It is GREAT to be back home!" note L-R:Kristin, Mandy, Boyd, Vanessa, Eve, Mike, Ed, Kyle
Kristin: I know this is hard for you to believe because you are so old school, but I do not need a man.
Mike: You have a baby; that says you needed a man once.
Advertisement:

Last Man Standing is an American sitcom starring Tim Allen and Nancy Travis that aired on ABC from October 11, 2011 to March 31, 2017, and Fox from September 28, 2018 to May 20, 2021. It's often referred to as a Distaff Counterpart of Allen's first series Home Improvement.

Allen plays Mike Baxter, director of marketing at Outdoor Man, an outdoor sporting goods store in Denver, Colorado. He is proudly a man and is frustrated about how the world is trying to make his gender more sensitive. At home his world is dominated by women — his wife Vanessa and three daughters: adult single mom Kristin, high school-aged girly girl Mandy and middle school-aged tomboy Eve. The only other male in his house is Kristin's young son Boyd.

He originally was often away from home taking up sponsors for the store catalog, but as things become more Internet-based he turns to promoting products on the website in videos while ranting about various topics surrounding masculinity, making him a mild celebrity and keeping him at home. He is good friends with his boss and owner of the store, Ed, while also striking a friendship with a younger employee, Kyle, who becomes friendly with the family.

One hook from the show is that it approaches a lot of political, social and interpersonal topics with an upfront, frank attitude that is uncommon in most shows. Mike uses the Outdoor Man web videos as his own personal soapbox on a topic related to the overall episode, which typically skew towards his own conservative views and are balanced out by quite a few liberal family members, neighbors and others, ensuring that the more controversial subjects get a fair depiction. Even though it is a family-friendly show, they do not shy away from topics like sexuality, sexual orientation, drinking, drug use, bullying and even racial tension, many even at the teenage level.

Considered a Spiritual Successor to Home Improvement due to being an Allen vehicle where he plays similar characters as a father obsessed with preserving and passing down manhood and has a public forum as part of their jobs to share their views on the episode's subject matter. In fact, the second episode of the final season even had the two characters meet.

While the show was never a hit with critics like its predecessor, it did well enough in the ratings to warrant six seasons and over 100 episodes and was one of the most notable aversions of the Friday Night Death Slot in this age of television...until ABC cancelled it in 2017. However, Fox picked it up over a year later and a seventh season began airing in fall of 2018. The series managed to continue for another three seasons before ending with its ninth season in May 2021 with a one-hour series finale.