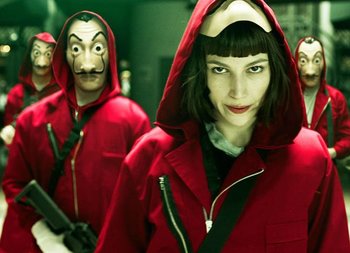 Hands up, this is a heist!

La casa de papel (Literally "Paper House", marketed by Netflix in English as Money Heist) is a 2017 Spanish TV Series created by Álex Pina (also the creator of Locked Up) broadcast by Antena 3 (also known for Aquí no hay quien viva, Allí abajo or the aforementioned Locked Up). The full series is currently available on Netflix.

This show deals with a heist... but not just any heist: the takeover of Spain's Royal Mint

by a diverse group of criminals, with the goal of forcing the workers to print 2.4 billion euros in untraceable banknotes over the course of 10 days.

In the planned robbery, the group is to follow three rules:

The day of the heist coincides with the visit of a group of students, among whom stands out Allison Parker, the daughter of the British Ambassador to Spain, and who is to play an (unwittingly) important role in the Professor's plan. The first phase of the plan goes swimmingly, but soon it becomes obvious that no plan survives contact with the enemy, and even the most obsessive Crazy-Prepared plans can be screwed up by human nature.

After the international success of Seasons 1 and 2note Originally a single season on Antena 3, but it was split into two for the international release., the decision was made to renew for a third season, with its premiere on July 19th 2019.

A tie-in event in Rainbow Six Siege ran 21-25 November, 2019. The event features a special hostage mode and cosmetic items based on the iconic red outfit and Dali mask.