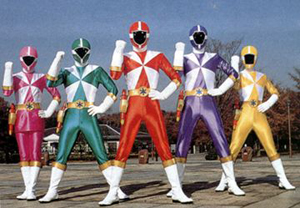 Kyūkyū Sentai GoGoFive (Rescue Squadron GoGoFive) is the twenty-third installment in the Super Sentai series, running from 1999 to 2000. The Title Theme Tune was performed by Shinichi Ishihara.

In 1999, the Tatsumi siblings, a family of rescue workers, is contacted by their long-absent father, Mondo Tatsumi. He tells them of the coming invasion of the evil Saima Clan, and gives them the means to fight them. Now, as the Kyukyu Sentai GoGoFive, the Tatsumis must stop the Saima from resurrecting their Queen, Grandiene.

In its final episodes, it notably aired alongside the first revived Kamen Rider series, Kamen Rider Kuuga, in what would later be known as the Super Hero Time block.

The series is available to stream for free at Shout! Factory TV