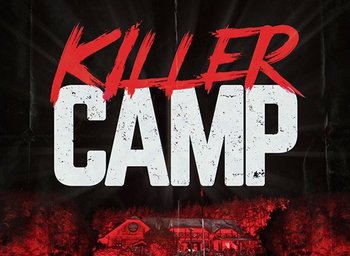 Camp Counselor Bobby will be the first to tell you that everything at Camp Pleasant is picturesque and perfect… except the minor problem of the brutal murders. You See, He and Camp Handyman "Bruce" trick unsuspecting youths into spending a week at this camp against their will to play a Deadly Game involving to try to find the "killers" among them, before they are killed off one by one every night at campfire. Can the other campers figure out who is innocent and who is a Killer before they fall victim to a brutal death?
Advertisement:

Killer Camp is a Slasher Movie themed Horror-Comedy Reality show that first debuted on ITV 2 in Halloween Week, 2019, Before being re-aired as a summer show on the CW in 2020. While the original UK broadcast debuted to failing ratings, the show performed well enough in its us broadcast for it to be renewed for a second season co production between both networks.