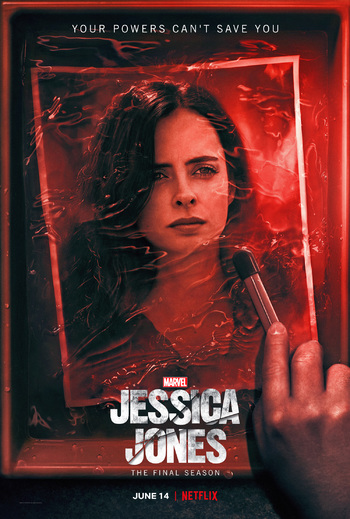 I lie awake and watch it all
It feels like thousand eyes...
"A big part of the job is looking for the worst in people. Turns out I excel at that."
— Jessica Jones
Advertisement:

Jessica Jones is a 2015 original series based on the Marvel comic book Alias, developed by Melissa Rosenberg. It is the second entry in the Marvel Cinematic Universe's The Defenders mini-franchise, sandwiched between the first two seasons of Daredevil, and preceding Luke Cage, Iron Fist, The Punisher, and The Defenders. The series originally premiered on Netflix.

A second season of Jessica Jones was released on March 8, 2018. Following Kilgrave's defeat, Jessica tries to live an ordinary life, but finds herself being forced to confront her past as it turns out her troubles don't start and end with Kilgrave. Season 2 adds several new cast members including Janet McTeer as Jessica's mother Alisa Jones, J. R. Ramirez as Oscar Arocho, Callum Keith Rennie as Dr. Karl Malus, Terry Chen as Pryce Cheng, and Leah Gibson as Inez Green.

A third season was ordered on April 12, 2018 and released on June 14th, 2019. On February 18, 2019, it was announced the show was canceled along with The Punisher (2017), effectively ending the Marvel original series run on Netflix and making the third season its last. The show also has the distinction of being the only Marvel-Netflix series to be cancelled before the release of its final season. Joining the cast for the third and final season include Jeremy Bobb as Gregory Sallinger, Benjamin Walker as Erik Gelden, and Aneesh Sheth as Gillian. In February 2022, the series, alongside the rest of the Defenders franchise, exited Netflix's platform, moving to Disney+ the next month.