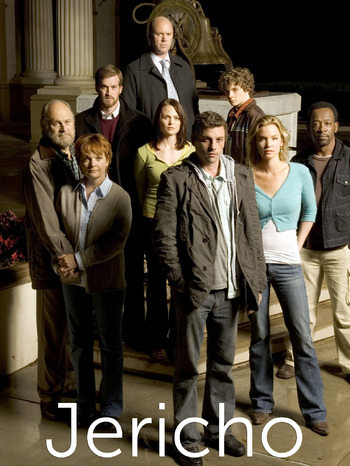 A small town in Kansas struggles to survive After the End once several major US cities are destroyed in terrorist attacks with nuclear bombs. Features a sprawling cast of townsfolk from the mayor on down, and centers on the Green family. This show is remarkable for being a hard science fiction, featuring such things as radiation poisoning, the effects on an EMP and the value of such common things as salt. Not quite as fatalistic as that other nuclear-war-surviving Kansas town, from The Day After, which early episodes were compared with.

Anyone Can Die and they stay dead. Also notable is the Heroic Bystander approach to heroism, as a major theme is the common man having to choose to do the right thing or give in to baser urges or becoming Disaster Scavengers. Other major themes involve family and heredity, redemption, and the struggle to preserve American values like democracy. Similar to Battlestar Galactica (2003) drawing tension and avoiding the Inferred Holocaust by dealing with issues like shortages in food, electricity and the people who want to steal from those who have these.

The first season, which premiered in 2006, focuses on the mystery behind the bombing, represented by Robert Hawkins, a mysterious newcomer to the town who knows more than he should, and also on the personal relationships, issues and problems implicit in surviving. The second season focuses on the towns folk's attempt to rebuild Jericho while under the thumb of the corrupt new federal government and powerful corporate interests.

The show was canceled by CBS due to low ratings, but was brought back by a fan campaign. A second season was shown in 2008, detailing the rise of an oppressive new government based in Cheyenne, Wyoming, but the show was again canceled due to low ratings. (Although the last episode tied up most of the immediately-dangling plot-threads.) There was talk of a feature film that went nowhere, but in 2011 there was a six-comic series called Jericho Season 3: Civil War. Jericho: Season Four with five issues followed, completing things. Writers from the series wrote the comics as well.

Not to be confused with the 1966 TV series, which also ran on CBS, the My Little Pony: Friendship Is Magic fanfic, the British series Jericho of Scotland Yard, or the video game Clive Barker's Jericho.