WARNING! The tropes in this article were contributed by trained professionals. So for your safety, and the protection of those around you, do not attempt to submit any of these tropes you are about to read. 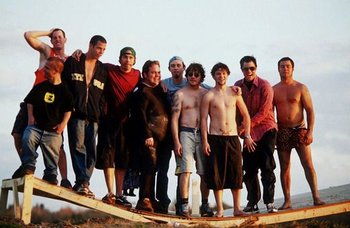 Each episode is a compilation of segments featuring the show's cast of nine "stuntmen, skateboarders and all-around lunatics" performing pranks and stunts on themselves, each other, and — through hidden cameras — the public. These segments range from the juvenile to the humiliating to the gross to the borderline torturous to bizarre mixes of the four; it's pretty evident that if these guys weren't such close friends, they'd be way too busy hating each other's guts.

Jackass has roots in skateboard culture with the magazine Big Brother as well as Bam Margera's humor/stunt video series "Camp Kill Yourself" (or CKY), with its point of origin being Johnny Knoxville (then a struggling actor and Big Brother writer) pitching an article about becoming a human guinea pig for various self-defense weapons — which culminated in Knoxville getting shot in the chest to test out a bulletproof vest. His editors, upon filming test footage, found it so funny that the rest of the staff (including Knoxville, England, Pontius and Steve-O) got in on recording similarly masochistic videos.

Media Watchdogs and Moral Guardians more or less had panic-induced heart attacks at the very thought of their kids watching this show, let alone being influenced to copy its stunts, and their outrage resulted in a huge movement to get the show canned (which, ironically, may have increased its popularity).

The format proved popular enough to spawn three movies — the third in 3D — that allowed the gang to perform stunts and skits not possible on MTV. A fourth film is set for production

and tentatively slated to release on September 3, 2021 — although Knoxville and Steve-O are currently the only confirmed returning members, with Margera confirmed to not be in the film due to ongoing substance abuse issues.

Not to be confused with Jerkass, although they are jackasses for a different reason.

Hi, we're TV Tropes, and we associate the following tropes with Jackass: