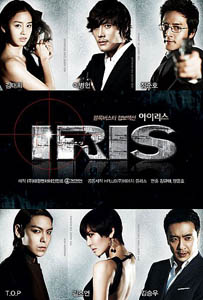 Don't be fooled by their looks. They can handle themselves.
Advertisement:

Iris (아이리스) is a South Korean Spy Drama, notable for being the highest-budget South Korean TV production to date when it made its debut on October 14, 2009 and has ratings American producers would kill for since it was a success in both South Korea and Japan when it was broadcasted on KBS2 and TBS with a Japanese dub.

The plot revolves around two friends from the 707th Special Mission Battalion recruited into a secret South Korean black ops agency known as the National Security Service. Of the pair, recruit Hyun-jun Kim (Lee Byung-hun) begins to uncover evidence that his Mysterious Past may not be so irrelevant to his joining of the secret organization after all. As the two friends find their loyalties tested and forge new, unlikely alliances, the journey takes them from their home country to Hungary, Japan, and China where they find themselves at the center of an international conspiracy when Hyun-jun finds out that an international terrorist group named IRIS has some big plans of their own regarding the planned unification of the North and South.

Iris was shown in the 34th Hong Kong International Film Festival, the 2010 Cannes Film Festival and in Japan, Hong Kong and Singapore so far. A TV special was aired as well, showing off some of the locations used in filming the TV series and interviews with the main cast. Unlike their peers doing the Athena series, this was not done due to some of the actor's availability.

The series won numerous awards, including the 2009 KBS Drama Awards, the 46th PaekSang Arts Awards and the 2010 International Drama Festival. Byung-Hun himself won an award from the Japanese Ministry of Land, Infrastructure, Transport and Tourism for the show's promotion of Akita as it took place in the Iris series. Byung-Hun also appeared in the 2009 Cannes Film Festival to promote the show during a break. The main cast had also attended training sessions in preparation for the show's combat scenes in handling weapons and unarmed combat as well.

The Iris original soundtrack was released as a 16-track album on November 13, 2009, with music composed by Yi Dong-jun and Choe Seong-gwon. The soundtrack contained a number of the vocal themes used in the series, including those by Baek Ji-young, Shin Seung-hun, and Big Bang.

The show is currently available overseas (TV show and movie compilation) with either Amazon/Netflix or through limited distribution in Asia, the Americas and PAL territories.

Note: To avoid confusion, names are in western (given name first) order.