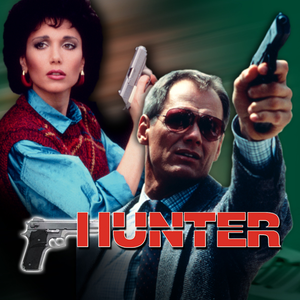 Hunter is a drama series about two Los Angeles homicide detectives, sergeants Rick Hunter and Dee Dee McCall. It was created by Frank Lupo and produced by Stephen J. Cannell Productions, and ran on NBC for seven seasons starting in 1984.

Rick Hunter (played by ex-football player Fred Dryer) has a reputation for being a Cowboy Cop, which makes him less than popular among his superiors. While he tends to bend the rules and disregard orders, he only does so to get evidence against the bad guys, and his intuition never fails in picking out who is a bad guy or who isn't. He would never stoop to manufacturing evidence or framing an innocent.

Dee Dee McCall (Stepfanie Kramer) is Hunter's partner. As tough as she is good-looking, she is sometimes called the "brass cupcake". She is just as pro-active as Hunter when fighting crime and doesn't hesitate to get into physical fights with the criminals, but she is less hot-headed and often acts as a calming influence on her partner. In the last season, McCall leaves the series after getting married to an old flame and is replaced by two other female detectives.

Not to be confused with the book of the same name by white-supremacist author William Luther Pierce.