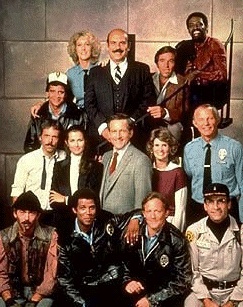 Featuring a cast big enough to fill three shows.
"Hey, let's be careful out there!"
—Sgt. Phil Esterhaus at roll call every morning, every day.
Advertisement:

Hill Street Blues is a serial police drama that was first aired on NBC and ran for 146 episodes from 1981-1987. Chronicling the lives of the staff of a police precinct in an unnamed American city (which uses Chicago exteriors in some opening theme shots), the show received high critical acclaim and its innovations proved highly influential on serious dramatic television series produced in North America. Its debut season was honored with eight Emmy awards, a debut season record surpassed only by The West Wing, and the show won a total of 26 Emmy Awards (out of 98 total Emmy Award nominations) during its run, including Outstanding Drama Series for four years in a row.

The series was unique at the time for being the first to bring together several ideas in TV drama:

Currently (2022) the complete series is available on DVD (region 1) as well as streaming on Hulu.