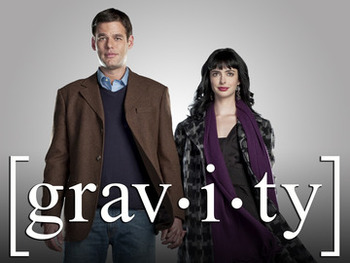 I sell make up at a department store, I change lives." - Lily Champagne

This is not about the force that is stopping you from flying off the face of the earth. Sorry.

An American series from Starz about a support group for people who tried to kill themselves and ultimately a dramedy about the hollowness of modern life.

Enter Lily Champagne, a cute yet depressive girl who works at a department store and is completely alienated from life due to her self-proclaimed incapability to "feel" and her new reluctant love interest, Robert Collingsworth, a successful but unhappy oftalmologist who can't let his deceased wife go.

After both of them pass through failed suicide attempts, we get to know the rest of the main cast, other suicidals who attend the support group at a church: Dogg, the grumpy black man in a wheelchair who runs the group, Shawna, a failed model in her forties, Adam, a problematic kid from a rich home, Jorge a fireman who dreams to be a stand-up comedian, and Carla, a "dream housewife".

As we flash back into their suicide attempts and follow their lives, we watch the dramedy of them trying to fix themselves up following Dogg's main rule: "You have to change the person you were when you attempted to kill yourself."