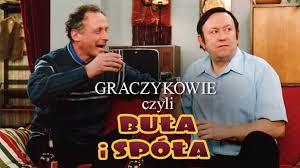 Buła, the Graczyks' family neighbor, lives with his son Walduś and "fiancee" Zuza (although marrying her is his worst nightmare...) in Warsaw. His life is a mixture of being a Kavorka Man, drinking, trying to hide his infidelity, starting a new Zany Scheme, or having an obsession that his lodger, Leon, tries to murder him.

Rumian: No, no, that was two weeks ago - and I would like to know what happened a week ago.