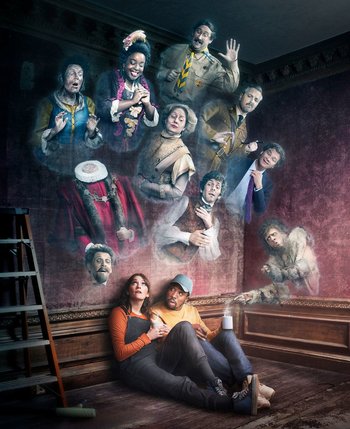 The premise revolves around a young couple, Alison and Mike (Charlotte Ritchie and Kiell Smith-Bynoe), who inherit the derelict Button House with plans to turn it into a hotel. Little do they know, Button House is also home to numerous restless spirits who have died there over the centuries, unable to leave the grounds and resigned to squabbling with each other for eternity: Robin (Rickard), a caveman and the oldest of the ghosts; Mary (Katy Wix), an eccentric woman burned as a witch during the Stuart era; Kitty (Lolly Adefope), an excitable and naive Georgian aristocrat; Thomas (Baynton), a melodramatic and easily-infatuated Romantic poet; Lady Fanny (Howe-Douglas), the repressed and overbearing Edwardian-era owner of the house; The Captain (Willbond), a pompous World War Two-era military officer; Pat (Howick), a friendly scout leader accidentally shot with an arrow by one of his scouts; Julian (Farnaby), a slimy Conservative MP who died as the result of a scandalous sex mishap; and Headless Humphrey (head - Rickard; body - Yani Xander), a beheaded nobleman who, due to his own clumsiness, spends most of his time trying to reunite his head and his body.

When the ghosts learn of the couple's plans, they conspire to scare the couple away. Things don’t quite go as they expect, as the ghosts prove themselves to be pretty ineffectual at haunting. However, thanks to one of the ghosts, a near-death experience gives Alison the ability to see and hear them.

After finding out that her husband has taken out a massive loan to renovate the house, which the couple can't get out of, Alison and the ghosts form an uneasy truce as both she and Mike try their best to stop their dream home/hotel from turning into a complete nightmare.

An American remake is planned for fall 2021

on CBS with Rose McIver in the lead.

After seeing ghosts all episode, Alison consults a doctor who gives her an unexpected diagnosis... with unquestionable reasons for doing so.

After seeing ghosts all episode, Alison consults a doctor who gives her an unexpected diagnosis... with unquestionable reasons for doing so.