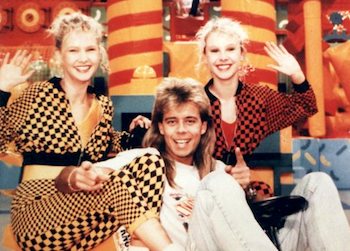 Pat Sharp, with Melanie and Martina Grant, from the ITV show
Advertisement:

Both were a children's Game Show that capitalized on the Covered in Gunge craze in the late 1980s and prolonged it deep into the mid- to late 1990s in the United Kingdom. Teams performed sloppy stunts and answered a question after every stunt in an attempt to earn the right to enter the massive Fun House onstage. The first version was the U.S. series, which was hosted by JD Roth, who would later go on to work in Reality TV, and ran between 1988 and 1991; it was produced by Lorimar-Telepictures, and later by Warner Bros. after they acquired L-T in 1989. The United Kingdom came along with its version of the show shortly after in 1989 hosted by the much mulletted Pat Sharp and ran for a whole decade as opposed to four years for its older brother.

After the U.S. version ended its run in syndication, it aired for one more season on the brand-new Fox Kids Network with a few changes. There was also a Spin-Off series, College Mad House. Instead of pitting two teams of two kids together, two teams of four students each from rival universities competed, with much more risqué challenges thrown in. Greg Kinnear presided over that circus.

In the United Kingdom, Fun House became something of an institution to kids now aged between 20 and 30 as the zenith of gungey game shows. Airing on ITV during the 1980s and 1990s, it involved much the same things as the U.S. version did, but with different twins, different hosts and a set which was more like a carnival funhouse than just a fun... house.

The UK version is currently being repeated on Challenge TV.