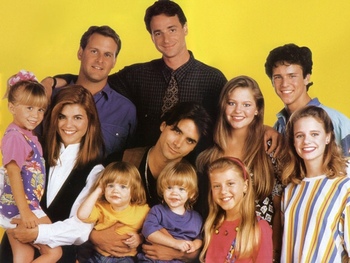 "I still don't know what the premise of the show is. Three guys living together in San Francisco? Draw your own conclusion."
— Bob Saget, TV Guide note (Canadian Edition) Week of May 27 - June 2, 1995.
Advertisement:

A 1987–95 ABC Dom Com about Danny Tanner (Bob Saget), a San Francisco TV sports anchor left to raise his three young daughters alone after his wife was killed by a drunk driver. He asks his brother-in-law Jesse Katsopolis (John Stamos), a musician with a love of Elvis and later The Beach Boys, and his best friend Joey Gladstone (Dave Coulier), a stand-up comic with no shortage of impersonations, to move in with him and share the duties of raising Danny's daughters, fifth grader Donna Jo aka D.J. (Candace Cameron Bure), kindergartener Stephanie (Jodie Sweetin), and baby Michelle (Mary-Kate and Ashley Olsen). In season four, Jesse marries his girlfriend Rebecca (Lori Loughlin), who moves into the house, whereupon they have twin boys and both families end up living under the same roof. The show was the flagship of ABC's TGIF lineup in the early 1990s.

Even when it first aired, it was considered a fairly generic family sitcom with little bite. To the surprise of just about everyone, the show became a cultural icon. It was a mixture of being a show for kids when that was increasingly less common on Network TV, provided the most truly family-friendly fare you could get on TV (when parents were most likely looking for that sort of thing) and the superstardom of the Olsen twins. The twins became famous for playing the cute baby character Michelle, and started popping of catchphrases left and right — The "little baby/toddler says cute things" power exploded like a super-charged version of The Family Circus, and pandering to the audience with cuteness nearly always works, especially with moms and little kids. Some have also suggested that despite the wholesome sugar, the show represented the idea of "alternative" families. The three girls were essentially raised by their uncle and their dad's best friends.

In April 2015, nearly twenty years after the final episode, Netflix announced plans to create a revival series, titled Fuller House. The story focuses on the now-grown-up D.J. and Stephanie, along with D.J.'s best friend Kimmy Gibler, as they live in San Francisco with families of their own. That show ran from 2016 to 2020, spanning five seasons.

Not to be confused with the Korean Drama of the same name.