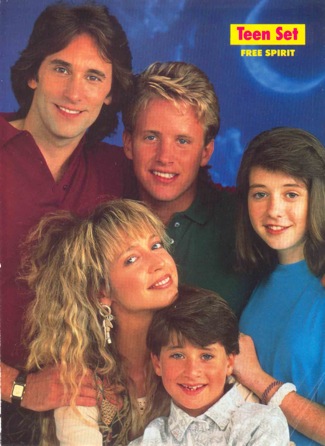 Something about your smile has a touch of magic in it...note Clockwise from upper left: TJ, Robb, Jessie, Gene, Winnie
Winnie Goodwin has the Harper family under her spell.
—TV Guide Advertisement
Advertisement:

A short-lived Fantastic Comedy that premiered on ABC in, well, 1989.

Every 100 years, a witch must provide assistance to a mortal in need. When the time comes for the fun-loving Cute Witch Winnie Goodwin (Corinne Bohrer) to perform "public service" in this manner, she finds herself becoming a Magical Nanny and new friend to young Gene Harper and his two older siblings, Robb and Jessie. The kids' father, divorced lawyer Thomas "TJ" Harper, remains unaware that Winnie can perform magic. Hilarity Ensues.

Due to poor ratings and reviews, this series was canceled after 14 episodes, the last of which never aired in America, being pre-empted by a Full House rerun (it did air in Australia).