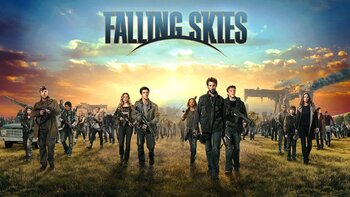 Noah Wyle (ER) stars as Tom Mason, a former college professor who becomes the second-in-command of a group of soldiers and civilians (the 2nd Massachusetts or just the "2nd Mass" for short) struggling against an occupying alien force. Moon Bloodgood (Terminator Salvation) co-stars as Anne Glass, a pediatrician who works with the survivors to help them cope with the traumatic situation.

Season one concentrates on the survivors trying to get by in the Boston area, and ends in the realization of how little the humans actually know about their oppressors. Season two deals with their efforts to get to a possible safe zone in South Carolina. Season 3 deals with humanity's uncertainty concerning a group of alien allies who have arrived. Season 4, dealing with the 2nd Mass having to deal with being incarcerated in a ghetto and the next phase of the aliens' plan aired in 2014, with the show's fifth season dealing with a march to Washington D.C. for the final showdown.