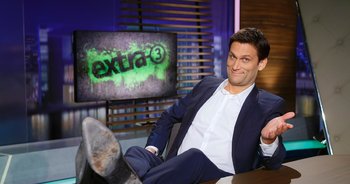 Extra 3 is a german Satire program that focuses mainly on political humor as well as the absurdities of everyday life, in a segment titled Der Reale Irsinnnote The Real Lunacy.

It started in 1976 on the Norddeutscher Rundfunk developed and hosted by Dieter Kronzucker and has since then had almost a dozen different presenters. It is now hosted by Christian Ehring. The program in its current form mostly consists of Ehring doing short monologues covering different political topics of the past week which are linked by pre-taped segments.

While always somewhat known, the show stepped into the national spotlight in 2016, as after publishing a Song Parody criticzing Turkish president Recep Tayyip Erdoğan, the german ambassador to Turkey was summoned to meet with the Turkish president and Turkey demanded the removal of the video. The situation escalated further, when Jan Böhmermann in part in response to the absurdity of the situation did an intentionally offensive poem on his show prefacing it with "you are not allowed to say that on television". Well turns out, you can't and Böhmermann almost got thrown into jail under a 19th century law on leise majeste. However, the law has since been changed, which may or may not have been the point. A year later, extra3 produced a second song critizing Erdogan.

For some reason they really do not like Deutsche Bahn, featuring them negatively in their "realer Irrsinn" segment even for stuff that - upon careful investigation - actually has good reasons for being done the way it is done.