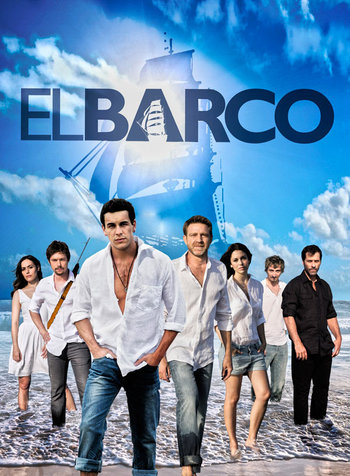 "It's very probable that, right now, we are the last inhabitants of the planet..."
— Julia Wilson

El barco is a Spanish sci-fi mystery TV series, that started on 17 January 2011. It tells the story of the Estrella polar, a school ship that goes into the Atlantic Ocean for what's expected to be a voyage of two months. At the helm of the ship stands Captain Ricardo Montero (Juanjo Artero), who comes into the ship with his daughters, 20-year-old Ainhoa (Blanca Suárez) and 6-year-old Valeria (Patricia Arbues), whose mother has recently died. Julia Wilson (Irene Montalá) is the ship's scientist, Julián de La Cuadra (Luis Callejo) is the captain's right hand, Salomé (Neus Sanz) is the cook, with "Burbuja" (Iván Massagué) helping her, and some of the pupils are Piti, Estela, Ramiro, Vilma and priest Andrés (Bernabé Fernández), among others. A special guest comes in the form of stowaway Ulises (Mario Casas), who is looking for his father, Julián.

At first, it seems that, after some scuffles between the pupils, everything will be going OK. However, the people at the ship, save for Julia, don't know that the LHC is being turned on. Things go very awry, very soon, when the LHC starts working and accidentally recreates the Big Bang, apparently killing everyone in Geneva and expanding all over the world. A gigantic storm washes over the Estrella polar, soon acquiring the look of a hurricane, but the ship survives miraculously thanks to being in a series of coordinates where they are protected from the storm thanks to a submarine fault line. Soon, it becomes apparent that the disappearance of the other ships from the radar isn't a coincidence: it soon becomes apparent that the ship might be the only sign of human life resting in the world.