Series / Cutie Honey: THE LIVE
aka: Cutey Honey The Live 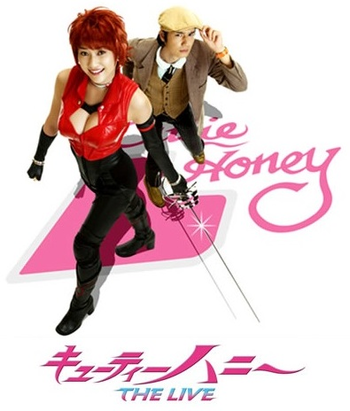 So you've got the license to a famous anime franchise and you made a live-action adaptation that was pretty damn popular despite the fact it was quirky as hell. Where do you go from there? Why, make a twenty-six episode live-action television show!

Cutie Honey: THE LIVE is quite possibly one of the most indecisive series ever produced. At times, it attempts to be a deadly serious and dark drama with the very worst traits of humanity on full display. Then Cutie Honey comes along and the show turns into a bubbly, light-hearted martial-arts romp with heaploads of hilariously blatant Fanservice. The combination is both strange and unique, and when the show takes a sharp right-turn into Cerebus Syndrome it becomes an incredibly sombre tale about the value of life and the nature of evil.