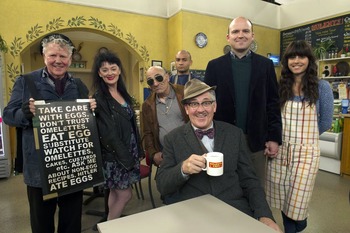 Count Arthur Strong is a television adaptation of Steve Delaney's long-running character, an ageing, perpetually unemployed variety act. It ran for three series, between 2013 and 2017, and exists in a separate continuity from Count Arthur Strong's Radio Show! and the stage shows.

Count Arthur Strong is a music hall performer who's never had much success. He spends his days hanging out at his local cafe with his friends and remembering bygone success that didn't actually happen — and getting on the owner's nerves in the process. One day he's approached by Michael Baker, who's writing a book about his father, who used to be Arthur's double-act partner. Sensing an opportunity to spread word about his act and attract new employment, Arthur pulls Michael into all sorts of misadventures with the promise of useful anecdotes.

Although debuting to disappointing ratings, the series proved to be something of a Sleeper Hit and the third series was promoted to a primetime slot.