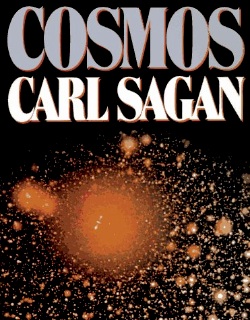 If you wish to make an apple pie from scratch, you must first invent the universe.
"The Cosmos is all that is or ever was or ever will be. Our feeblest contemplations of the Cosmos stir us — there is a tingling in the spine, a catch in the voice, a faint sensation as if a distant memory, of falling from a height. We know we are approaching the greatest of mysteries."
— Carl Sagan
Advertisement:

Cosmos: A Personal Voyage is an educational television series written and narrated by astronomer and writer Carl Sagan, first released by PBS in 1980, and was also published in book form. It is best known for its presentation of a wide variety of scientific topics — astronomy, physics, biology, evolution, environmentalism, nuclear power, and more — in Layman's Terms, making both the wonder and the terminology accessible to the public. It also had cutting edge special effects for the time it was produced and also crossed over into science fiction by having Sagan explore remote corners of time and space via a "Spaceship of the Imagination". As such, it was one of the first science-documentary series to receive serious coverage by science fiction entertainment publications such as Starlog.

The series has been credited with inspiring an entire generation of scientists and formed a template for nearly every mainstream science program that followed. It was re-released as a DVD collection with commentary by Sagan, mainly to discuss where Science Marches On. Even today, it remains remarkably relevant; although some of the facts are dated, the majority of the principles and theories discussed by the show remain intact.

Cosmos: A Spacetime Odyssey aired on FOX network 34 years later as both a remake and an update. Written by Sagan's widow Ann Druyan, with Neil deGrasse Tyson as host, viewers were once again taken on a journey through the wonders of the Cosmos. It used many parts from the original series which still held up and showcased many things which had come about since the original show's airing, also branching off in other directions.

Cosmos: Possible Worlds is a continuation of Spacetime Odyssey from the same creators, first airing in 2020 on National Geographic Channel and then later on FOX.