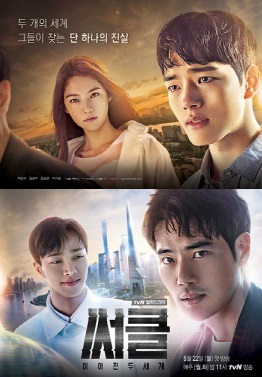 The drama is divided into two parts. The first, The Beta Project (2017), is set in the present and revolves around twin brothers who think they saw an alien in their childhood. In the present, the younger brother, Kim Woo Jin, is a university student, and his elder brother Kim Bum Gyun was recently released from jail, having been incarcerated for causing someone's death, because he thought the person was an alien. Bum Gyun is convinced that the alien who they met in their childhood is the one who caused their father to disappear and is also the reason behind a spate of student suicides at Handam University. Woo Jin is not inclined to believe him, until he and his brother spot a girl, Han Jung Yeon, who looks exactly like the alien from their childhood. Suddenly, everything seems to be connected, including the suicides. The brothers and Han Jung Yeon work towards uncovering the reason behind the university suicides, unravelling a bigger mystery in the process.

The second setting takes place in the future, A Brave New World (2037). The story is about an alien invasion in 2017 and the subsequent new Earth in 2037; which is separated into the "Smart Earth" where people's emotions are controlled and no crimes or illness exist, and "General Earth" where people still suffer from rampant plague and lawlessness. Kim Joon Hyuk is a violent crimes detective who lives on General Earth and is skeptical of Smart Earth. However, he believes that his missing brother is on Smart Earth and is able to gain entrance into Smart Earth when a sudden murder shocks the crime-free utopia. Once on Smart Earth, he discovers that everything is not what it seems and that the disappearance of his brother could be linked to the corporation that controls Smart Earth, Human B.