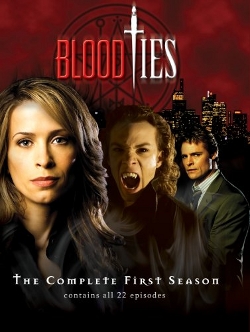 The series is based on the Blood Books by Tanya Huff. The leads are a private investigator, a vampire, and a cop. This show plays with and subverts several tropes of the Friendly Neighborhood Vampire genre: we are supposed to be sympathetic to him, but he isn't "friendly" in the usual sense.

He is a very efficient practitioner of the Kiss of the Vampire, so there is a long line of bimbos who want to get into his bed. (The book version of Henry Fitzroy is cheerfully bisexual, but this version is apparently heterosexual.)

Strictly speaking, Henry is a Vampire Sidekick. The actual lead is Vicki Nelson (played by Christina Cox), a human PI (and former cop), who's wound up specializing in cases on the unearthly side. There is a Love Triangle between Henry, Vicki, and Vicki's old flame Mike Celluci, who is a (human) police detective and the resident Agent Scully.

Further note: Henry has no problem with holy symbols; he carries his own crucifix and attends Catholic Church. He is as good a Catholic as television and his vampirism permit (he has to be awfully promiscuous so that no one loses much blood over time).