Series / Blade: The Series
aka: Blade 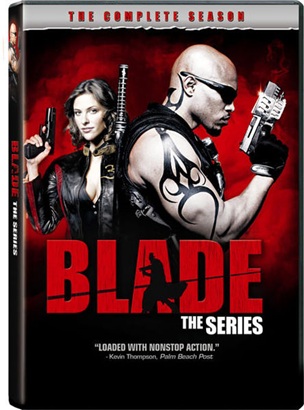 An American TV series that followed in the continuity of the Blade films, though without any of the main cast. Kirk Jones (best known as the rapper Sticky Fingaz) replaced Wesley Snipes the role. The series was short-lived, lasting only from June to September, 2006. A total of 12 episodes.

The series follows an Iraq veteran, Krista Starr, as she learns about the Vampire Masquerade after her brother was killed. (No, not that one!) Eventually, in a bid to destroy the House of Chthon from the inside, she herself is converted into a vampire and must deal with her own hunger.

But who cares about that? We're just here for Blade!

This series also delves into the history and backstory of Blade himself, filling in the gaps the films don't explore, including introducing us to Blade's father.

Notably, the series backs off from the third movie's 'final solution' to the vampire menace, with offhand comments about how the Day Star was a mess, but was handled by the Vampire Hierarchy.