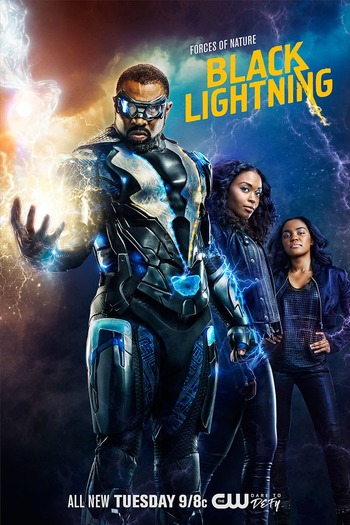 In the night, he's the light.
"Justice, like lightning, should ever appear, to some men hope, and to other men fear. My father taught me that poem when I was just a little girl. I didn't fully understand the poem, until I grew to know the truth about my family and myself."
— Jennifer Pierce

Black Lightning is a 2018 superhero television series aired by The CW, based upon the DC Comics character of the same name.

Jefferson Pierce (Cress Williams) was once Black Lightning, the only hero his community had to protect them from a criminal gang known as the 100. At the behest of his wife Lynn (Christine Adams), he dropped his vigilante career to become a high school principal and raise his daughters Anissa (Nafessa Williams) and Jennifer (China Anne McClain) without being at risk in battle.

However, the 100 didn't go away like he did and have become an even greater danger to the city, the school, and Pierce's family, and Jefferson must return to the life of a superhero if he is to protect all that he cares for. Also, having been kept in the dark over their father's past, his daughters are confused when each starts to exhibit powers of their own...

The series' executive producers are Greg Berlanti and screenwriters Mara Brock Akil & Salim Akil. Though it was originally not established as being set within the Arrowverse, it eventually crossed over during Crisis on Infinite Earths (2019) with an episode in the third season serving as a direct tie-in, followed by Jefferson appearing in Hours Three and Five of the crossover. Events in the crossover caused the unnumbered Earth this originally took place on, colloquially named "Earth-BL" by the Arrowverse Wiki (on the grounds that it needed a page), to merge with Earths-1 and -38 as a unified "Earth-Prime", meaning it is now an Arrowverse series.

It is also considered a Netflix Original in countries that do not have access to The CW channels (which does cause some Continuity Lockout issues for the above Crisis Crossover).

"This was the night, in the rain, with Thunder and Lightning as witness, that Black Lightning was born again."