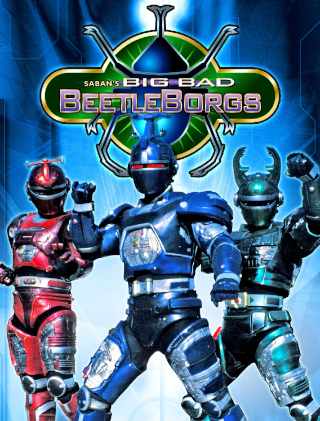 Beetleborgs was a live-action series produced by Saban Entertainment and aired on Fox Kids. It was called Big Bad Beetleborgs in the first season and changed to Beetleborgs Metallix in the second. A Power Rangers-like Sentai show, it incorporated footage from a Japanese show (in this case, the Metal Heroes shows, Juukou B-Fighter and B-Fighter Kabuto) with new footage created in the United States. The show lasted from September 1996 to March 1998.

Unlike Power Rangers, this show made little attempt to be serious, being more light-hearted and comical (meaning that it makes even the early seasons of Power Rangers look like a Sam Peckinpah film). It also had a storyline completely different from its Japanese counterparts. It even aimed to a younger demographic, evidenced by the heroes being 9-10 years old.

It was about three typical all-American kids: Drew McCormick, his sister Jo, and their best friend Roland Williams, whose family owns the local comic shop, where they spend most of their time. On a dare from some bullies, they go inside the local "Haunted House." Once inside, they free Flabber, a wacky ghost with Elvis Presley's hair, Jay Leno's chin and Liberace's wardrobe filtered through a Blue Meanie, who had been imprisoned in the mansion's pipe organ. Flabber cannot thank the kids enough, so he offers to grant a wish for them. The three young comic book fans know what they want, and that is to be able to transform into their favorite superheroes, The Big Bad Beetleborgs. Flabber grants their wish, and the children are given the power to turn into the heroes, but now that the heroes exist in the real world, the villains from the comic book likewise come to life to spread chaos (via the Monster of the Week).

The three friends, with their new powers and a little help from Flabber, must stop them. This is complicated by the "House Monsters," comic relief monsters (Count Fangula, a vampire; Wolfgang, a werewolf; Mums, a mummy; Frankenbeans, a Frankenstein's Monster, and later Little Ghoul a... er, little ghoul), who often try to eat the kids, but generally have to settle for eating the screen-time and the scenery.

The second season had an exchange of villains and subsequently an exchange of costumes, with a new ally in the artist who created the comics and his evil brother working for the new bad guys. Slightly Darker and Edgier, but nothing too shocking. The show remained relatively popular, but like Power Rangers the source footage eventually ran out. Unlike Rangers, there was no follow-up series to adapt (well, technically there was, but it was drastically different from the previous B-Fighter shows and was bizarrely even more kid-friendly than Beetleborgs).

As of June 2011, the entire series (along with VR Troopers and Power Rangers) is available for streaming on Netflix.

This comes with a character sheet.