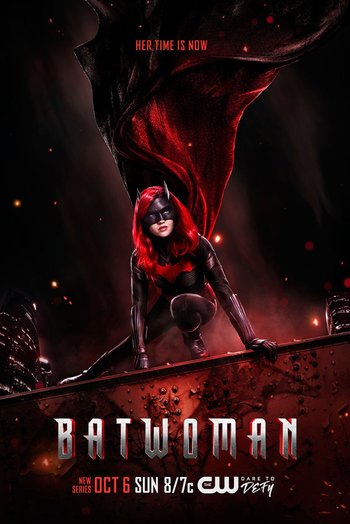 We thought masks were only popular in that other city.
Tommy Elliot: You're... not Batman.
Batwoman: That's the point.

Batwoman is a 2019 superhero series on The CW, based on the DC Comics character of the same name, the fourth original live-action installment of the Arrowverse and the seventh live-action installment overall.note Supergirl, Constantine, and the 1990 series of The Flash were all retroactively included into the shared universe, so Batwoman is the fourth to be created with the intent to make it an Arrowverse series. The series premiered on October 6, 2019.

After five years living overseas, Katherine "Kate" Kane (Ruby Rose) returns to her hometown of Gotham. Kate was called in after her father Jacob (Dougray Scott), head of the private Crows Security firm, told her that Sophie Moore (Meagan Tandy), the firm's elite operative and Kate's ex-girlfriend, was abducted by the Wonderland Gang, an anarchist group which has been threatening Gotham ever since Batman, the city's caped protector, disappeared three years prior. Kate has had a longstanding grudge against Batman, whom she blames for the deaths of her mother and sister Beth during an attack by The Joker many years ago, so she is understandably shocked to find out that he is actually Bruce Wayne, her beloved paternal cousin (his mother Martha was Jacob's older sister).

Despite her misgivings, Kate realizes that as long as Batman is gone, Gotham will forever stay unsafe. Aided by Luke Fox (Camrus Johnson), son of frequent Batman ally Lucius Fox, and Mary Hamilton (Nicole Kang), Kate's stepsister and a medical student, Kate decides to take up her cousin's mantle before saving Sophie. The news of the rescue quickly spreads to the public, who become hopeful that Batman has finally returned, but Kate's brief encounter with Alice (Rachel Skarsten), the Wonderland Gang's leader, brings back traumatic memories of her past when she begins to suspect that Alice is Beth, all grown up.

Batwoman is notable for finally introducing a member of the Bat Family to the Arrowverse after many Easter eggs and mythology gags, as well as being the sixth live-action television series (following Batman, Birds of Prey, Gotham, Titans, and Pennyworth) based on elements of the Batman mythos. The first arc, featuring Kate battling Alice and the Wonderland Gang, is heavily inspired by Greg Rucka & JH Williams III's Elegy story from the comics.

On May 19, 2020, Ruby Rose announced her departure from the series after completing Season 1. While it was initially assumed that the role of Kate Kane would be recast, it was later confirmed

that a new character (and Canon Foreigner) named Ryan Wilder will be introduced to carry on the legacy. Two months later, it was announced that Javicia Leslie (God Friended Me) will be playing the part.

Before the series started, Kate appeared in the Elseworlds crossover, with the actual series pilot being set before and the rest set after it. The series also participated in Crisis on Infinite Earths, though since the series was relatively new only Kate and Luke were featured. It was previously announced

that the series would head the sole crossover event of 2021 with the upcoming Superman & Lois. However the cast shakeup and potential ongoing issues with COVID-19 leave the status of that event up in the air.