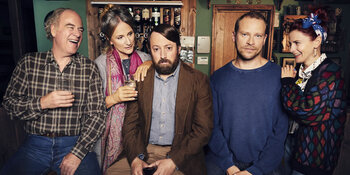 The latest outing of Mitchell and Webb, Back is a British sitcom that aired on Channel 4 in 2017. A second series began airing in the UK in January 2021.

David Mitchell stars as Stephen, whose father has just died and bequeathed him a pub. After the failure of his career and marriage, he sees it as a chance to reinvent his life. Robert Webb plays Andrew, who was briefly fostered by Stephen's father as a child. He turns up at the funeral and decides he wants a hand in running the pub. Stephen's mother Ellen (Penny Downie), his sister Cass (Louise Brealey) and his uncle Geoff (Geoffrey McGivern) are quickly charmed by the new guy. Stephen is resentful – and suspicious.