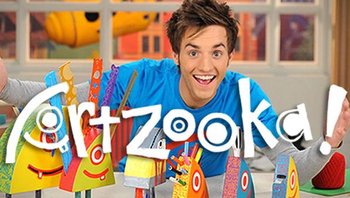 Artzooka! is a Canadian TV series revolving around art. The series airs on various stations, including CBC Television and Qubo. It is produced by CCI Entertainment.

The host of the show, Jeremie, shows viewers how to make various kinds of crafts from everyday objects. There is also an animated character in the show named Paper Bag, who appears in the movies Jeremie makes near the end of each episode.